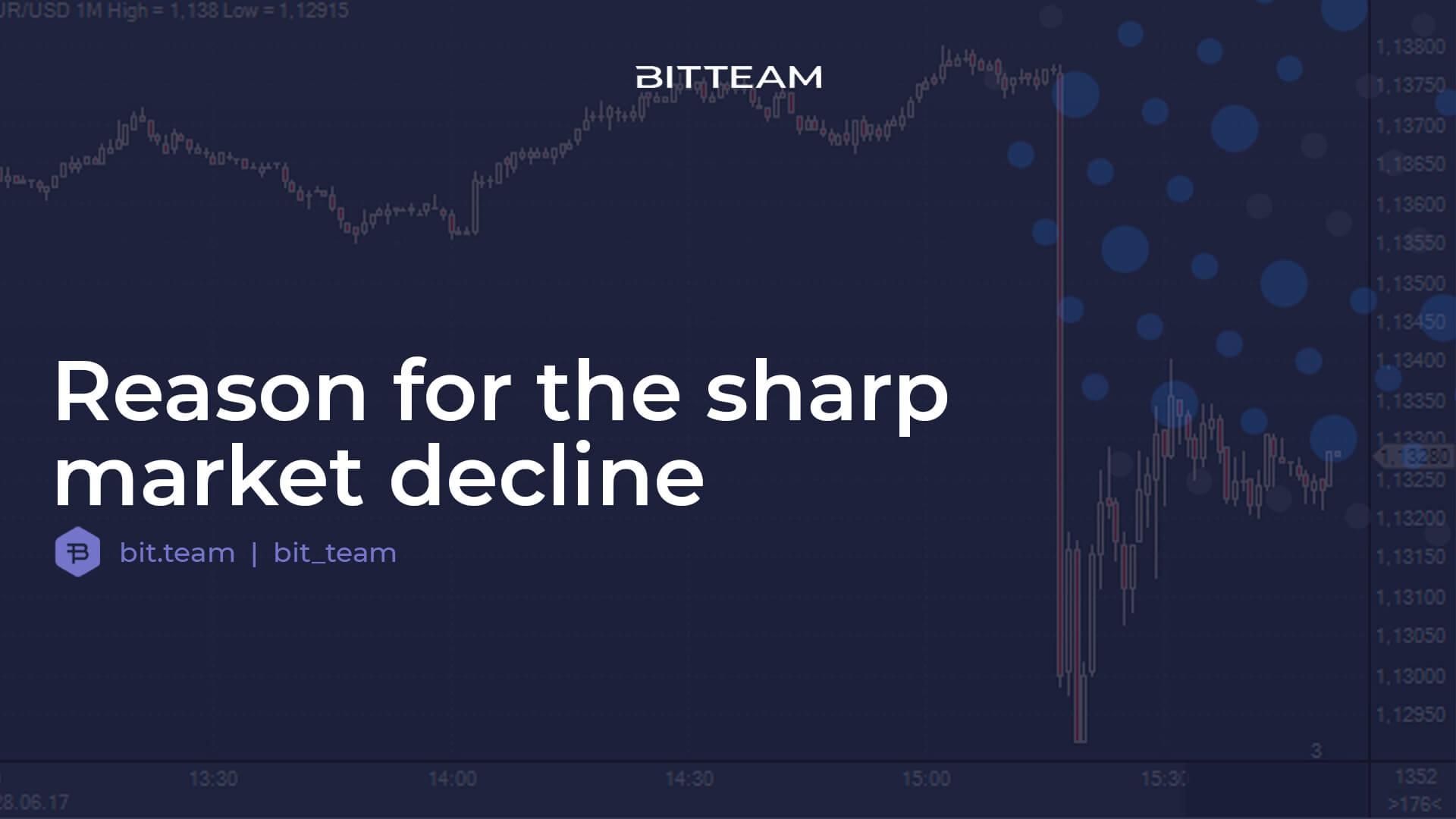 Market collapse amid the wave of fear for FTT, FTX and Alameda

Yes, the market has fallen again. And you might have notices, this is a regular thing for it. This time the reason was the FTT token.

The market situation, although with increasing tension, still seemed relatively controlled when FTT lost the both symbolic and technical threshold of $22. But, in just a few minutes, it collapsed, then rebounded, then again continued the chain sale to $15.

This led to that several assets in the sector, including Bitcoin, and then other most capitalized assets, lost significant amounts in terms of capitalization. In just an hour, BTC fell from $20.6 to $16.9. Tensions were further exacerbated when the crypto community found out that the market’s decline was the result of a clash of titans that would leave many small investors destitute.

This story has an aftertaste of personal revenge and a complicated relationship between two extraordinary businessmen. But, let’s take everything in order.

In recent months, Sam Bankman-Fried, one of the richest people in the cryptocurrency industry, the head of the FTX exchange and the trading company Alameda Research, has acted as a kind of cryptocurrency messiah. When any company, fund or project had problems, the 30-year-old billionaire always appeared like a jack-in-the-box, and either helped directly or at least pretended to help. His pockets, in terms of financial capabilities, seemed bottomless. But, in a matter of hours, the situation changed, and his FTX crypto exchange found itself in the arms of the hegemon of the Binance sector. This is one of the most stunning, fast and strange business deals of recent years.

Binance founder Changpeng Zhao and FTX creator Sam Bankman-Fried are currently two of the most influential figures on the global crypto scene. Two figures who had a complicated, tortuous relationship with each other. It seems that they played a key role in the current acquisition. The basic scheme, at first glance, is outrageously simple: FTX got into trouble, Binance came to her rescue and bought out all her operations outside the United States. How noble!

But, there are a lot of questions: why are there problems? Why so fast? Why Binance? The key to the answers is to understand the history of the relationship between two men who are known on social networks under the initials CZ and SBF.

CZ vs SBF, and an unexpected outcome

Binance was founded in 2017, much later than Coinbase or Kraken, but quickly rose to the top, and began to play an important role in the cryptocurrency world. Two years later, FTX was born, and Zhao decided to make strategic investments. Immediately, in 2019, he became one of the minority investors in the Bankman project. He felt potential in it, and also wanted to have a certain control over it.

Over time, the bet on FTX was justified, because the exchange really turned out to be extremely ambitious and capable, like its founder. No later than the end of 2020, it became clear that if anyone could threaten Binance, it was the Bankman-Fried company. And then what was supposed to happen happened — their paths diverged.

Last summer, Binance exited FTX, which at that time had raised $900 million from investors, at a valuation of $14 billion. However, she left not with pockets full of cash, but with a large number of FTT tokens, worth $2 billion, issued and used by the FTX crypto ecosystem.

A lot has changed in the cryptocurrency space since July last year. Cryptocurrencies rose and rose, but from the November highs a year ago, they only fell, as if they were jinxed. The Terra network collapsed, several major projects, such as the Celsius Network and Voyager, went bankrupt, and the Three Arrows Capital fund failed. In short, tens of billions of dollars have disappeared from the market. Which, of course, attracted the attention of regulators. Well, of course!

At that moment, Bankman-Fried was suitable for the role of a kind of spokesman for the crypto community, paying millions of dollars to lobbyists in Washington and Brussels, participating in political meetings. Not everyone in the business community took it positively. They were worried that a businessman who likes to talk about himself as an altruist who wants to give away his entire fortune was playing games with an unclear ultimate goal.

Zhao also did not know that American regulators (and the American market is as important to Binance as the rest of the world) are likely to listen more to the North American businessman than to the Canadian-Chinese one, just when relations between Washington and Beijing have reached an impasse. Even Bankman-Fried reportedly played this card on purpose during debates with senators and congressmen, and also attacked Zhao on Twitter, teasing him in various ways. And then the owner of Binance decided to go on the offensive.

A couple of days ago, a message appeared on Coindesk that FTX’s trading subsidiary, Alameda Research, is experiencing liquidity problems, and that most of its assets amounting to more than $10 billion are FTT tokens issued by FTX. Both Alameda and Bankman-Fried tried to say that the situation is not serious, that there are funds, that there is no reason to panic…

But, Zhao announced that in light of the new information, he would get rid of the entire FTT token package that he had held since last year after leaving FTX. And since FTT trading volumes are not very large, when someone with such a significant package starts selling them, the price, logically, begins to fall sharply. Alas, this is how the exchange laws of supply and demand work.

Whoever was the customer of the article on Coindesk, subsequent events worked exactly in favor of Binance. In the frenzied, electrified atmosphere of cryptocurrency investors, already frightened by several falls this year, the only thing that should have happened after such a statement was that they would want to return their funds. And so it happened. They started withdrawing money from FTX, which, as everyone knows, is closely linked to Alameda, although Bankman-Fried never fully disclosed exactly how much.

To be clear, we are talking about billions of dollars, and, obviously, it turned out to be too much even for him. And as a result, on Tuesday, just a few days after the publication of the first article, he admitted that his company was in financial difficulties, and that he had turned to Binance for help.

“They asked us for help, we signed a preliminary purchase agreement FTX.com …,” Zhao wrote on Twitter, adding that an intensive legal review will now be conducted. Bankman-Fried, who had previously attacked Zhao for several months for trying to put pressure on him with rumors, then confirmed everything:

“The circle has closed, the first and last investor FTX.com “the same one.”

What will happen next is not clear yet, events are developing very quickly, but one thing is clear – there is no one unconditional leader in the world of cryptocurrencies and crypto trading anymore. Everything can change in a matter of days. And this is not only because of the FTX takeover, but also because of another event of the last few days: Binance provided $500 million to Elon Musk to buy Twitter, which is a key communication tool and space in the crypto community.

And it also showed how dynamic this space is, that even a company that recently boasted record profits can find itself in a difficult position.

With regard to the transaction, it concerns only FTX operations outside the United States, but they make up the vast majority of its business, since Bankman-Fried and Co. they were not so strong in America.

By “taking out” a competing exchange and providing liquidity, Binance took the vacant place of the “messiah”, calmed the markets, and helped prevent another devastating shock, which even for Bitcoin could become, if not fatal, then seriously destructive, since massive falls and losses would follow.

One thing is for sure: if those behind it did it in retaliation for certain regulatory ideas, they can be sure that in the event of a collapse of this magnitude, regulators will come with a much sharper axe.