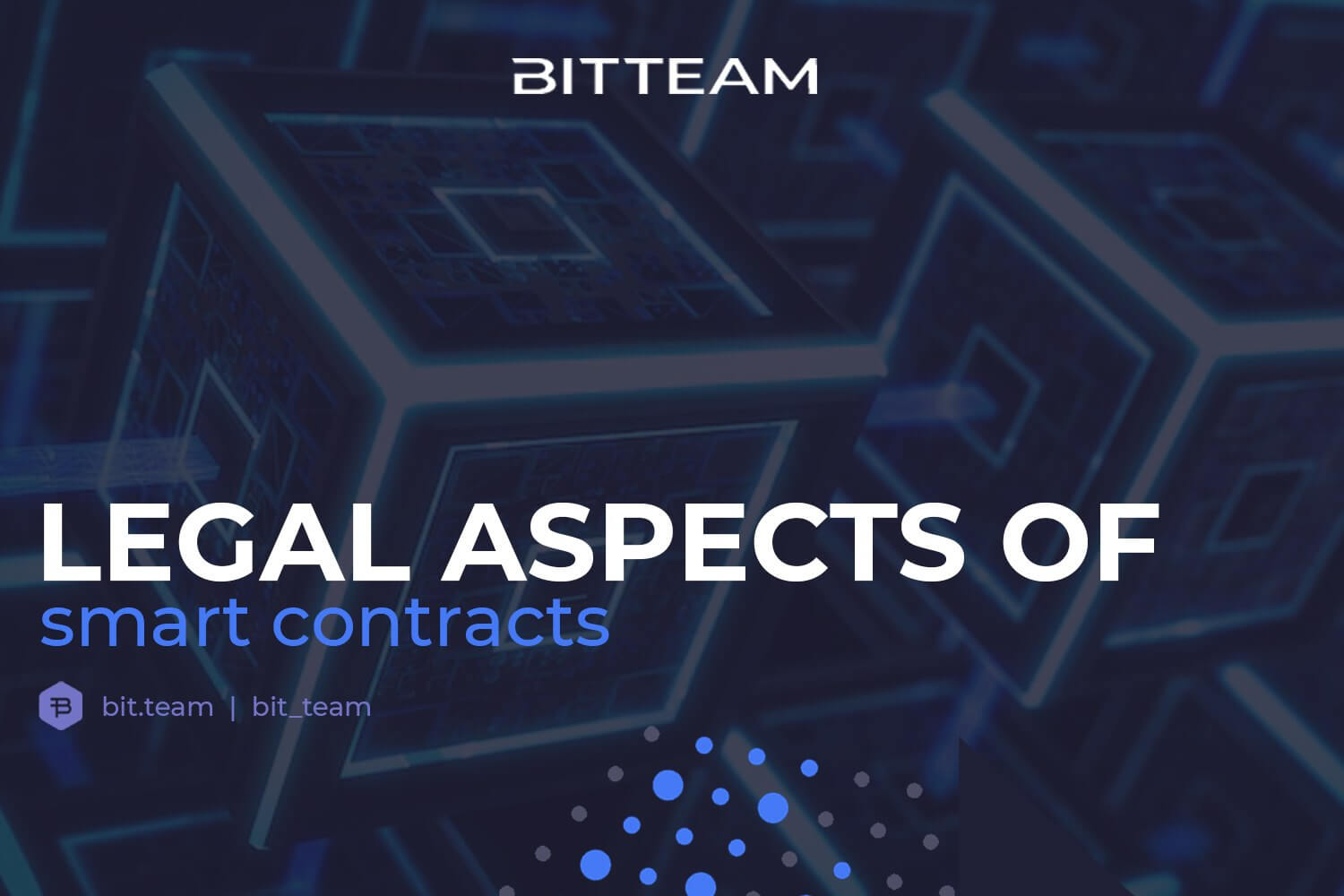 Legal aspects of smart contracts use

The pace of the introduction of IT technologies into everyday life is so high that even now it seems to many of us that a power outage for at least a day would be a real disaster, a leap into the Stone Age. But even continuous digitalization has its white spots, especially in such an innovative field as blockchain and cryptocurrencies.

As digital assets increasingly invade the global financial system, smart contracts remain “terra incognito” for the mass consumer. There are quite objective reasons for this, and one of the most important is the practical absence of legislative norms regulating their active use.

What is a smart contract, its pros and cons

A “smart contract” is understood as a type of transactions concluded in the form of an electronic contract. The main peculiarity of SC lies in the use of computer technology, specialized software and encryption mathematical algorithms. SC is being implemented with a distributed decentralized network infrastructure called a blockchain. It can be used by any person, natural or legal, who has access to the Internet, without requiring the use of intermediary structures.

The principles of distribution and decentralization, which are fundamental for blockchain and smart contracts, are at the same time considered factors that significantly limit their ability to be in the traditional legal field. But this conflict still finds partial solutions. Unfortunately, this process cannot be formalized, so attempts to legislate the use of smart contracts are fragmented. Even in those countries where cryptocurrency, blockchain and related technologies are treated loyally.

But if we abstract from the legal aspects, the use of smart contracts in a variety of fields of activity has many undeniable advantages:

It must be recognized that smart contracts, despite these advantages, cannot be called an ideal way to conclude and fulfill contractual obligations, and that’s why:

In general, if you were among the victims when using smart contracts, it may turn out that when contacting law enforcement agencies, you will be refused, since the contract was concluded without the participation of government agencies. Lawyers would say the same.

In short, in order for the use of the IC not to have negative consequences, their legal settlement is necessary. But, as noted above, at the moment there is no unified approach to solving this problem on a global scale.

The peculiarity of smart contracts lies in the fact that although they are a kind of contractual obligations, in many countries of the world there is simply no appropriate legislative framework for them. In addition, SCs do not require the use of many formal procedures typical of traditional paper (and in some cases, oral) contracts.

Some international legal acts have clauses concerning the regulation of contractual legal relations concluded through the use of electronic messages. In particular, this is stated in the UN Convention regulating the Use of Electronic Communications, as well as in the UN Model Law on International Electronic Commerce.

However, these acts lack clearly defined requirements for smart contracts concerning such factors as unambiguous identification of counterparties, fixing the subject of the contract, price aspects, force majeure, liability of the parties, the quality of the goods/services offered and other items usually prescribed in paper contracts.

Most countries have their own legal norms regarding the use of electronic contracts, but rarely where they are linked directly to smart contracts.

It is in this country that cryptocurrencies, blockchain technologies and smart contracts are treated with a proper understanding of their prospects.

Back in 2018, laws were passed here for the first time officially recognizing the UK (first in Arizona, then in other states). Thus, in Tennessee, the right to use smart contracts in the implementation of electronic digital transactions has been legislated, while such a contract must have legal/enforceable force.

In general, all laws in the United States concerning the use of smart contracts can be divided into the following categories:

in a number of states (New Jersey, Texas, New York, California, etc.), in order to comprehensively study the legal aspects of smart contracts, committees are being created that are authorized to make the necessary changes to local legislation;

Finally, there is a tendency to fully consolidate the concept of SC in local legislation. So, in 2020, the Illinois senators passed legislation concerning the recognition of blockchain technology and its derivatives, including smart contracts. In accordance with this law, the IC cannot lose its legal force just because the distributed registry (blockchain) technology was involved in its creation and use. At the same time, a number of restrictions are imposed on the use of the blockchain itself. The article equating smart contracts to electronic records allows them to be used both within the state and for conducting foreign economic activity.

In Singapore, there is an Act on Electronic Transactions, in which there are no legal norms regarding the regulation of smart contracts directly, but they are equated with technologies based on blockchain, which has a full legal status here.

There is currently no single legal framework related to smart contracts in the European Union. The only EU document indirectly regulating the use of IC is Article 9 of the European Parliament Directive on E–Commerce, which requires EU members to be able to conclude contracts using electronic means. Thus, all legal aspects in this niche should be resolved by the legislation of the EU member states.

At the state level, legislators in Spain and the UK understand the need for a legal settlement of smart contracts, but the matter has not yet gone beyond disputes.

The approach of China is interesting, where there is an official ban on the circulation of some cryptocurrencies and ISO, but at the same time, some IT companies continue to explore the possibilities of using blockchain technology and smart contracts and their implementation in the legal field.

The situation with the legal regulation of smart contracts is similar in the Russian Federation, where in 2019 the possibility of using smart contracts was legally fixed, and the term itself is not mentioned in the law. However, neither Article 309 nor Article 434 (paragraph 2) of the Civil Code says about any legal consequences of the application of such transactions.

In 2020, an attempt was made to solve this problem. The Ministry of Economic Development of the Russian Federation has submitted a draft law providing for amendments to Part 4 of the Civil Code of the Russian Federation. The document provides for the possibility of using standard ICS in terms of the safe disposal of rights regarding certain types of digital objects with automatic verification of the fulfillment of contractual conditions.

The 2020 Federal Law regulating the circulation of digital currencies and other assets also does not contain the term “smart contract”, although it stipulates the indirect possibility of its use.

Consequently, the legislation of the Russian Federation is poorly adapted to the legal regulation of smart contracts, and any changes, both positive and negative, are possible in this aspect.

Difficulties with the legal implementation of smart contracts

An electronic contract is a concept covered in sufficient detail in the legislation of many countries, but there are fundamental differences between it and a smart contract. The fact is that in its pure form, the IC embedded in the blockchain contains only the basic provisions of the type of object of contractual relations, the name of the smart contract, the cost of services / goods, deadlines, etc. A full-fledged electronic contract includes many clauses describing other aspects, especially legal ones (force majeure, non-fulfillment of obligations by one of the parties, etc.).

Thus, specialists in the field of law and IT technologies still have a lot of work to do in terms of finding consolidated ways to solve the problems described above regarding the use of smart contracts. Given the rapid development of blockchain-based technologies, including smart contracts, we can expect significant progress in this direction. At the same time, some aspects are quite difficult to bring into line with generally accepted legal norms. For example, reliable identification of the counterparty. Some crypto exchanges are taking steps in this direction, but at the expense of losing one of the main advantages of using blockchain technologies.

On the other hand, some types of smart contracts do not need much legal regulation. For example, if we are talking about trading NFT assets, where copyright protection is implemented through blockchain technology, and it turned out to be an order of magnitude more reliable than in the world of traditional art. By buying/selling digital works of art on our NFT marketplace, you are guaranteed to protect yourself from any copyright claims without using expensive lawyer services.